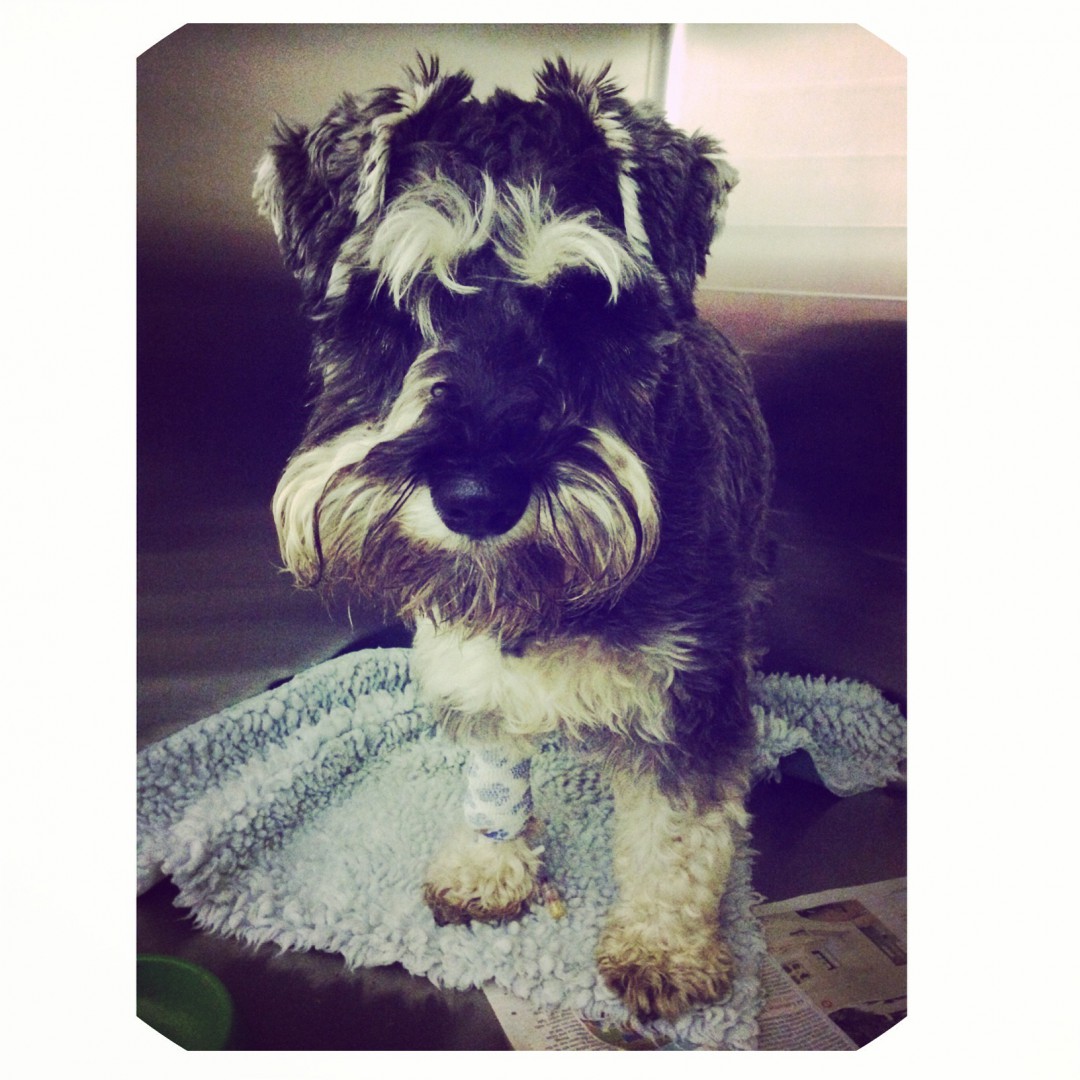 This week, Teddy had his first proper doggy illness. A sick Schnauzer – it put us all in a spin.
He was vomitting on Sunday evening. We put it down to over-indulgence on a treat-laden day out. He seemed cheery enough so we headed off to bed, with Teddy, cosied-up as usual, on his bed in the kitchen.
We came down in the morning to find the kitchen in a state. Mess from both ends all over the floor and one little Schnauzer with a hang-dog face. While we were cleaning up, Teddy – who has never pooped in the house let alone strayed upstairs – quickly vaulted up to my son’s bedroom and pooped on the carpet. Poor Teddy. (Clearly he was desperate to go, but I’m intrigued to know why he didn’t just carry on crapping in the kitchen? Did he think upstairs was the least value place, or was it simply because upstairs seemed the furthest from his ‘territory’, downstairs?).
Teddy was off his food that morning but by the afternoon he enthusiastically scarfed a chicken breast and we watched him drink water. Encouraged, we took him out for some short walks. He still had diarrhoea, but we assumed his body was doing an effective job of getting rid of what was upsetting him.
Then, the next morning we came into the kitchen to find lots of diarrhoea and lots of blood on the floor. We took him straight to Zasman Vet, where Rodney Zasman put Teddy on a drip to combat dehydration (although we’d seen him drink, it was not enough to replace what he’d lost) and kept Teddy in to check for Pancreatitis (he’s had several bouts of upset tummy before – but none on this scale) and infection. I got updates throughout the day. His high white blood cell count indicated infection or inflammation – we all felt relieved when Pancreatitis was ruled out. He was having antibiotics and something to help with his gut. He was being kept over night, not to be released until he was rehydrated, eating properly, and his poop had gone back to a more normal state.
Our sons wanted to see him and I dithered whether to visit the vet before bedtime, but thought that a visit that ended without him leaving with us would only upset Teddy more.
The next afternoon we heard that he had managed to down two tins of Lily’s Kitchen Recovery Recipe (apparently the only food he was interested in). His stools had firmed-up, his demeanour was positively perky. We were invited to collect him.
A rather tousled-looking Teddy gave us a rapturous welcome. Rodney gave us his suspected diagnosis: hemorragic gastroenteritis caused by Campylobacter (from dog scavenging). Samples have been taken to rule out Salmonella and several other infections that would require a follow up.
Teddy came home with his medicine and a good supply of Lily’s Kitchen Recovery Recipe.
A day later and Teddy is happily conked out beside me on the sofa, having had a decent, although not too long, walk.
What have I learned from this episode?
– Be wary when your dog vomits and has diarrhoea. Even if you see them drink that may not be enough to replace what they have lost.
– You can overcome your gag-reflex if you have to, and I had to: dog poo doesn’t disappear on its own. Keep Simple Solution Stain + Odour Remover in the house to make short work of stinky mess.
– I love our vet. Those updates were important and incredibly reassuring, as was the photograph, above.
– I love our pet insurance. The breathtaking vet bill will make me grouch less about the monthly insurance payments.
– We love our dog. Yes, I know that is a bit of a given, but still, 48 hours sans Ted just felt plain painful for us all. No tip-tap of paws on floorboards, no dog routine to observe, no doggy diversions to distract us, no chit-chat (yes, I do realise that chit-chat, even with a dog as sociable as Teddy, is a one way conversation.). Our house is simply not our home without him. No more sick Schnauzer, please. 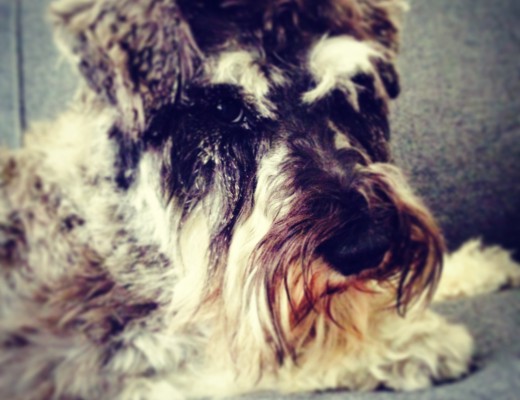 Teddy’s Tales: A Dog on the Sofa