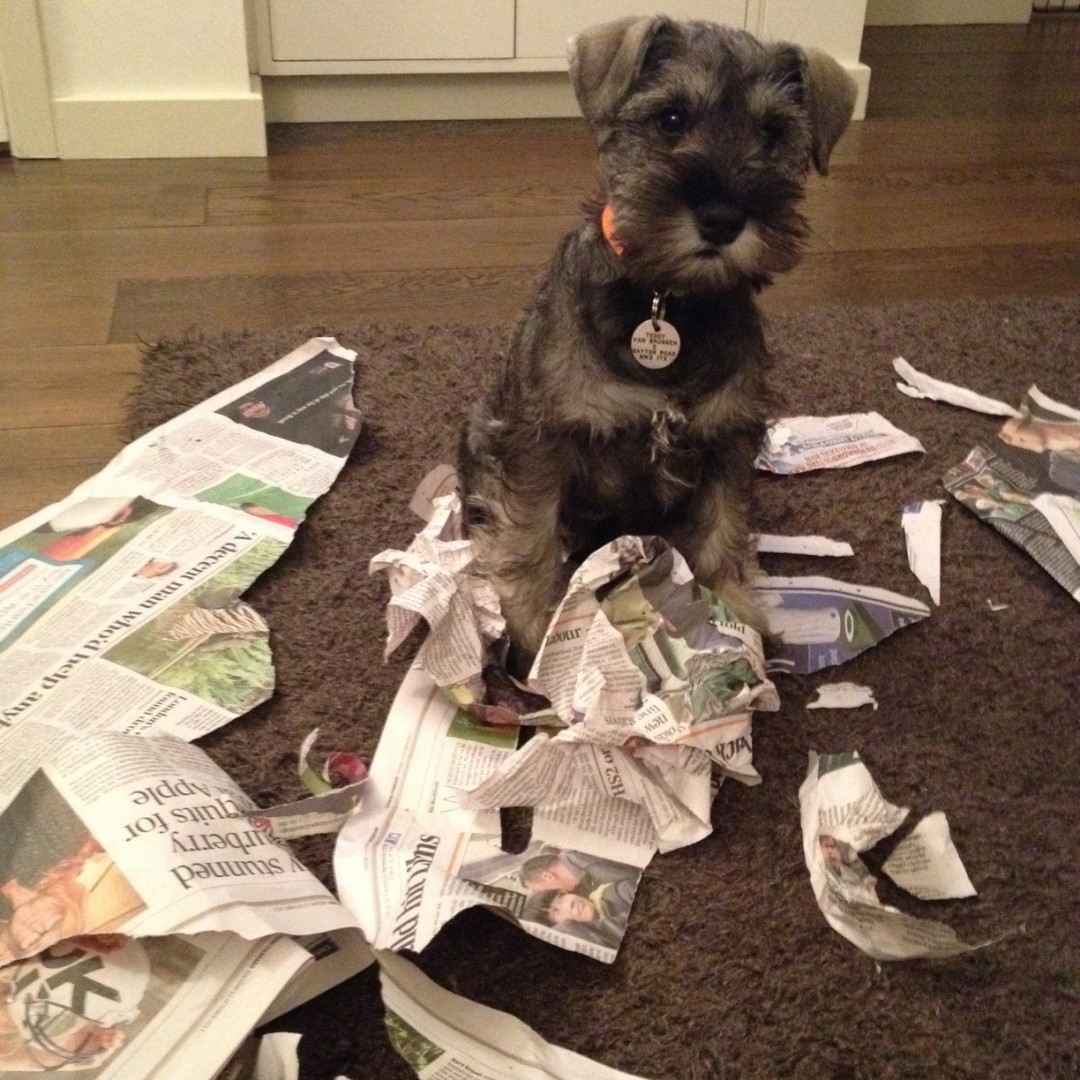 Teddy loves a newspaper. I like to think we have that in common. And while it can be slightly frustrating to have the Sundays shredded while I am in the kitchen making coffee, I have decided to choose my battles, and leave the newspapers on a taller table.
Training gathers apace. Before we start Puppy Class, Kevin-the-Trainer has listed all the things that a puppy needs to be exposed to sooner rather than later. There is a short window of opportunity (before 16 weeks) when puppies are receptive to all things new, and you have to make the most of it before fear kicks in. So the race is on to introduce Teddy to, among other things, trains, buses, roadworks, loud noises of any description and people – all different types, but particularly squeaky, unpredictable children.
We can’t take Teddy out on foot until his jabs kick-in so we take him out in a bag. Challenge number one: children. I make my way to school with Teddy’s head poking out of an ancient, towel-lined Herve Chapelier nylon tote. Few register Teddy’s head bobbing up and down in his customised carrier, but when my children come out of their classrooms and race towards our dog-in-a-bag, I realize that their talk this week must have been of little else: a swarm of classmates follow and we are swallowed-up by small hands eager to feel some fur. Teddy is remarkably un-phased but we cut his immersion therapy short as frankly it’s all a bit too much for me.
But at least it’s all positive. Going out and about with a new puppy reminds me a little of life with a new baby. Not only do I seem to be spending time lingering in bookshops (too long, clearly: an assistant at our local Waterstones now hails me from across the shop floor, “The Woman with the Dog-in-a-Bag!”) but like a baby, a pup brings out the best in people: they smile, they coo, they stop and pat. Teddy laps it up and I feel all warm and fuzzy.
Until we start Puppy Class and Teddy begins to bark. And bark. It’s a very specific, high-pitched yowl. As every other dog there seems to have tacitly agreed on a strict no-bark policy, Teddy suddenly looks out of control. Despite our best efforts to do as Kevin-the-Trainer tells us and turn Teddy around in order to break eye contact with the dog he’s barking at, Teddy continues. We start to imagine a future continually punctuated by Teddy’s raucous yelps.
A friend comes over with Fudge, her sweet and biddable Cavalier King Charles spaniel. The dogs start off well enough – we keep them on leads, they check each other out, they seem to be okay. Their leads are relaxed and then Teddy goes for the older dog. We start to imagine a future continually restraining a fluffy attack dog.
We visit my in-laws and their elegant, docile old Greyhound, Jess. Teddy enters their sitting room and, like a smudgy lightening bolt, he goes for her.
And then he moves on from barking and starts to go for other dogs at the Puppy Class. What’s happened to our calm little pup? “He’s a bit of a bully boy,” is Kevin-the-Trainer’s opinion. “We’ll have to nip it in the bud,” he says, warning us that he is going to tell-off Teddy the next time he acts up and that his method will sound worse than it is. In fact it’s nothing harsher than Teddy is meting out – all noise and but a small flurry of action which involves sending Teddy towards the other dog before pulling him away. It’s effective. Teddy recovers his jauntiness in seconds but behaves himself for the rest of the class. Kevin-the-Trainer is pleased with the results but I am left with a worrying feeling that we may have to get the hang of this complicated maneuver ourselves. 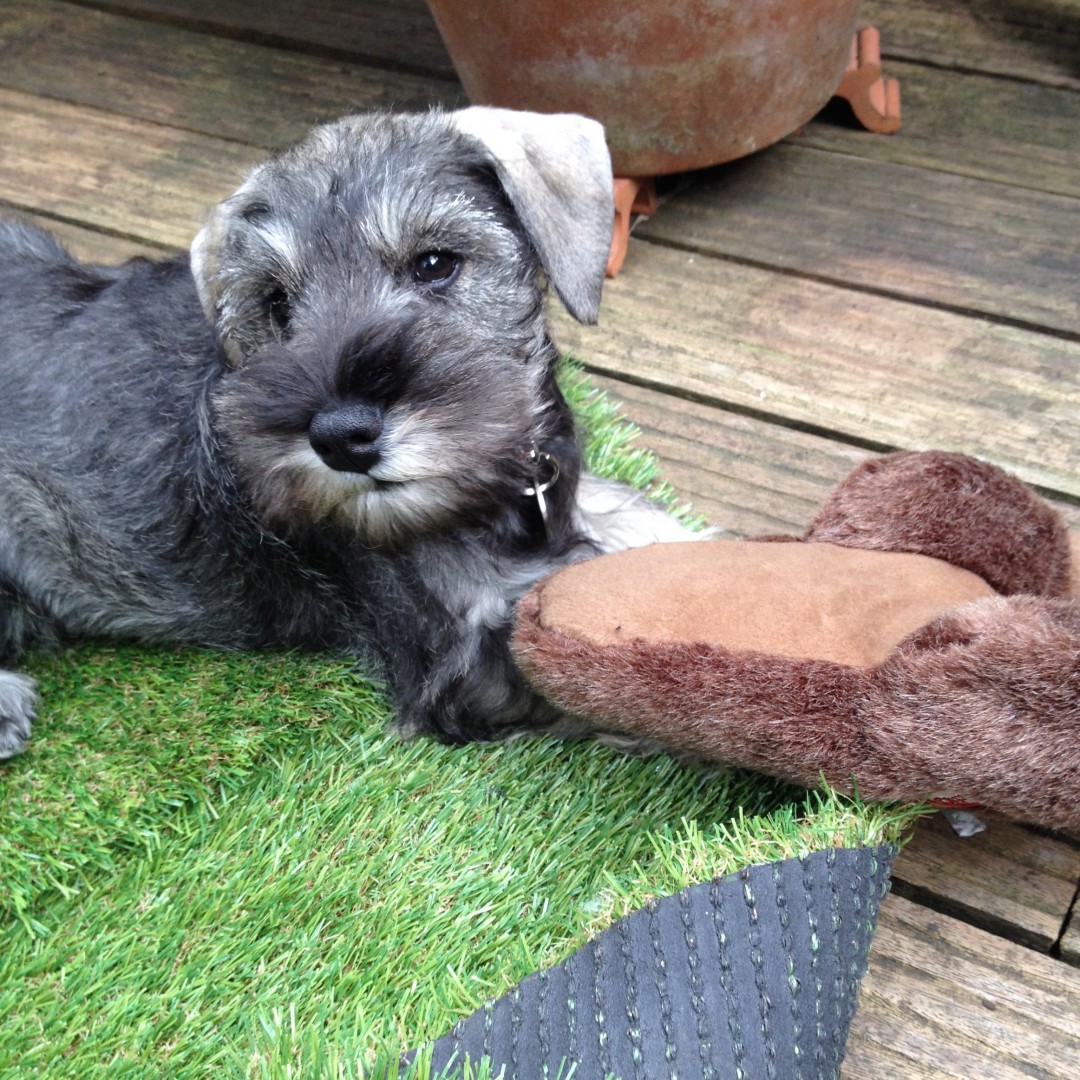 I probably should have trusted my instincts regarding the dog trainer. Her telephone manner was stern, verging on the bossy. And in person? Well, let’s say she clearly considers herself top dog. “She prefers canines to humans,” is my husband’s view.
We gather around as she curtails any questions, puts us firmly in our places and issues instructions that sound a lot like commands. When my son endeavours to do as he is told and give Teddy a treat while at the same time trying to avoid sharp little teeth, her remark: “Are you left-handed, cack-handed or what?” seals the deal. Not the trainer for us. We say goodbye.
My friend with a Cavalier King Charles suggests Kevin-the-Trainer. I telephone him and explain that we need a dog trainer to give us some pointers, like what to do when play bites get a little too real (every book gives a different suggestion) and how to involve the children in training. I also want to know what he thinks of Teddy’s temperament. We have welcomed this sharp-toothed little sweetie-pie into our family and yes, he’s gorgeous, but I’ve read the books, I’ve heard the stories: what’s the chance that he will turn our world upside down, but not in a good way?
Kevin comes the next day: “Let’s start you off right”. He scoops up Teddy, handles him confidently and explains in a straightforward manner how to play and train him at the same time. He gives the children some kibble and has them stand apart from each other. One child calls ‘Teddy, look what I’ve got,’ and Teddy rushes over to get a treat and his collar felt (to stop him getting edgy if caught by the collar later on), then the other child does it. Within seconds Teddy is ricocheting from one child to the other, getting to know his name, getting to recognize that the children can dispense treats and are therefore to be respected, getting to know that a touch on the collar often means a reward. And, having slipped over and scrabbled about on wooden floorboards for the best part of 10 minutes, he thoroughly exhausts himself. Excellent. We sign up for puppy classes. 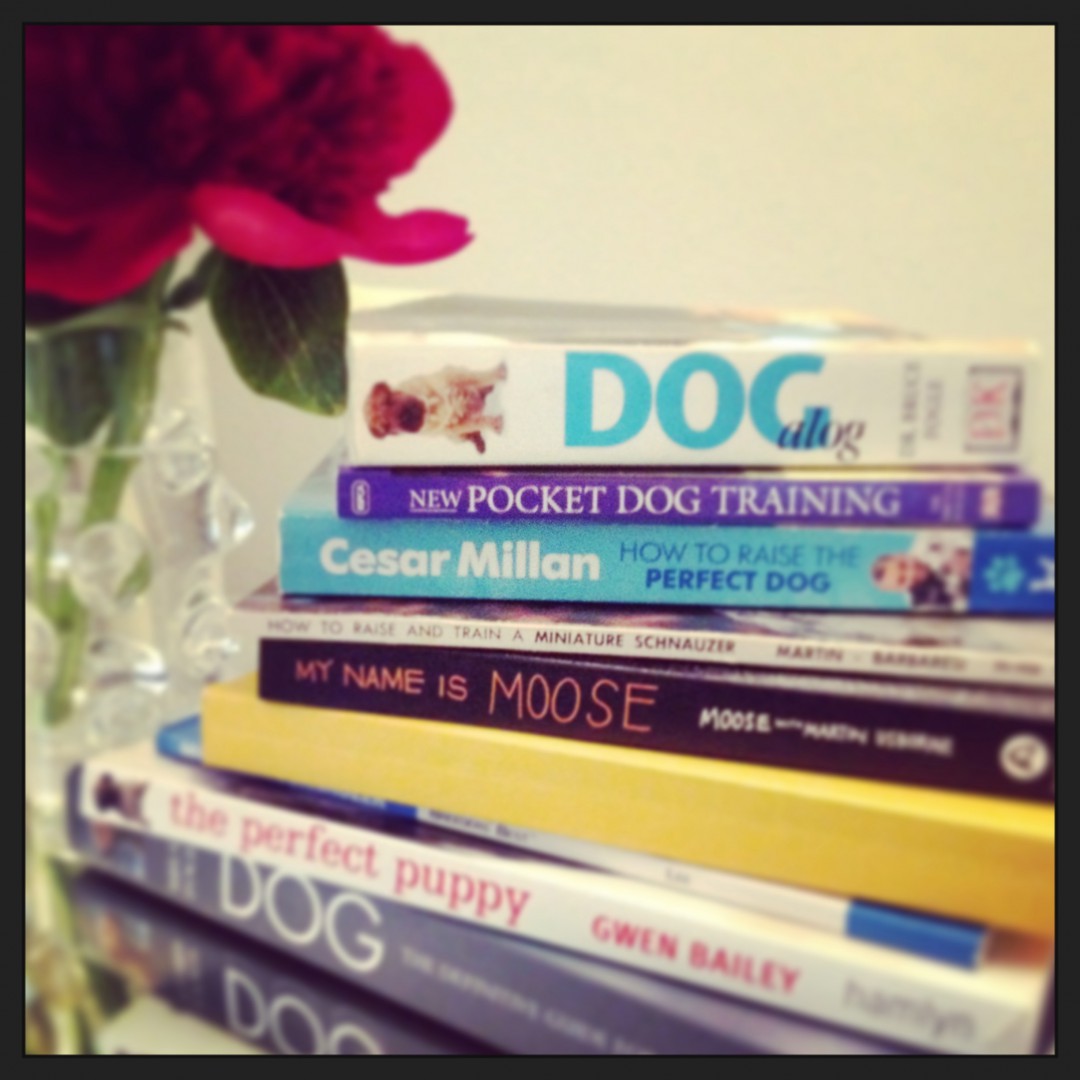 There seem to be two responses when you tell people you are getting a puppy:
1. Puppy envy: “The kids will love it! When can we visit?”
2. Puppy downer: “I never thought of you as a dog person. Do you want to be that tied down?”
Who knew that puppies were so contentious? I’ve had listings of low-points that verge on the malicious. Others ask me, maternally moist-eyed, if this will be my ‘third child’. (Let me be clear: I have never craved three children, and a dog is a dog.) Then there is the happy relief of friends who would quite like a pup to pet but prefer to hand it back before the need for a poo bag arises.
Honestly? It’s the scaremongers who have got to me.
Peeing, pooing, chewing, nipping, barking, whining: in order to learn to love (or at least accept) the dogginess of a dog, I am laying the groundwork and calling in a dog trainer. Too much, you think? Not if you’d read the training books I have ploughed through in the past three months. I’ve amassed a tidy stack (see above) on my bedside table. In the book shops there seem to be as many dog books as there are baby books, and they are equally as divisive.
While the family is agreed that we want a dog, I should probably say right now that I don’t like being licked by dogs, my sons get nervous around jumpy dogs, and poo bags? Well, they are going to be a learning curve for us all.
A mother at the school had success with The Dog-Mad Lady of Hampstead Heath. Not her bona fide moniker, but apparently an accurate description. On the telephone she comes over a bit Barbara Woodhouse. (Is this a good thing? Dog training has followed the way of child-rearing – these days it’s a whole lot more touchy-feely than Woodhouse and choke chains).
She barks questions down the telephone: Garden? Crate-training? Innoculations? Worming History? Vet? She asks me the name we have chosen – and approves it. (Would we have had to change it if she had not?)
She brushes aside some of the more prescriptive advice I’ve read with a ‘stuff and nonsense’ approach that I am willing to run with: maybe a dog calls for that Barbours and Agas approach. We’ll see.

Going through his bitey-puppy phase, skirting boards are the only things that Teddy really likes to gnaw (aside from my shoe laces, which makes me smile, so I’m sure he’ll still be doing it years from now). One thing I’m pleased to know about now I seem to be training dogs: Grannick’s Bitter Apple Spray, £7.99. Having sprayed the non-toxic stuff on the skirting boards, I’m relieved to report that the bitter taste has stopped him in his tracks.

When a dog walker with a small troupe of beautifully behaved mutts recommended Dr Ian Dunbar’s free, downloadable book, Before You Get Your Puppy as the best-ever, must-read dog book, of course I went home and read it. An excellent source of straightforward, sensible advice, it covers both the practical – choosing a puppy, crate training, toilet training, etc – and behavioural stuff you’ll want to get your head around before your pup arrives. I particularly like his suggestion that you make your dog a chewtoyaholic so that, a. they don’t get bored and go mad, and b. they end up chewing (and preferring) their own toys rather than your plumptious cushions / finely turned chair legs / prized Manolos.