Dogs With Left Paw Preferences May Be Different Emotionally

It seems as if more and more research is beginning to show that the organization of the dog's brain and the ways in which dogs respond emotionally are very similar to humans.

Some of you may know that for some 40 years of my life I studied the differences between humans who were left-handed and those who are right-handed (see for instance here). The reason for studying handedness is not simply an interest in motor coordination, but because some neuroscientists believe that handedness tells us something about the way that a person's brain is organized. It is well known that the left side of the brain controls the right side of the body and vice versa, however many researchers also believe that the emotional responses on the two sides of the brain are somewhat different. In humans the data suggest that the left brain is associated with positive feelings, like love, a sense of attachment, a feeling of safety and calm. Contrast this to the right brain where in humans, negative behaviors, like fleeing, and emotions like fear and aggression are more common. It has been argued that for right-handers, since the left hemisphere of their brain controls their dominant hand it may well be the case that that more positively feeling half of the brain also comes to dominate their emotions, while for left-handers it is there more negative feeling right hemisphere of the brain which has the most influence on their emotions. The evidence is mixed, however it is certainly the case that in populations of convicted criminals there are more left-handers than would be otherwise expected, and similarly there are higher rates of left-handers in groups of individuals with various emotional problems, including depressives, people with phobias, and people with antisocial personality disorders. 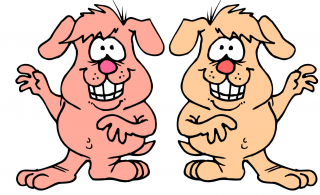 There is some research which suggests that many animals, including birds, frogs, monkeys and dogs have similarly organized brains. An example of this in dogs is the fact that the tail wagging movements of a dog are biased to the right or left depending upon whether they view a situation as being positive or negative. In general positive feelings pull a dog’s tail wags to the right and negative feelings pull the tail wags to the left as might be expected when the emotions associated with the right or left side of the brain are activated (for instance see here).

Dogs do have paw preferences which are similar to the hand preferences that we see in human beings. The difference is that while in humans 90% of the population is right-handed and only 10% left-handed, in dogs the preferred side preference is much more evenly distributed. However, given that many dogs do have a preferred paw, a team of researchers at University of Adelaide in Australia, headed by Doctor Luke Schneider decided to see if there were differences in the emotional responses of right and left pawed dogs. They used a collection of 73 pet dogs as their subjects.

First the researchers had to determine the preferred paw in dogs. To do this they used the popular Kong toy, which is a rubber toy roughly shaped like the body of the snowman, with a hole in the bottom. That hole allows some food to be stuffed into the toy and dogs will work at trying to extract the food. The researchers carefully noted which paw was used to hold the toy down while the dogs worried at the Kong to get the food, and on the basis of this scored whether the dog had a right or left paw preference. As expected the paw preferences were not as pronounced as we find in humans with 37% of the dogs tested showing no paw preference at all. Of the remaining 63%, 34% were left pawed and 29% were right pawed.

To measure the emotional patterns of the dogs the researchers used the Canine Behavioral Assessment and Research Questionnaire (C-BARQ). It is one of the best known, and most carefully validated questionnaires that assess a dog's behavioral characteristics. It looks at a variety of different aspects of canine behavior, including characteristics like trainability, excitability, various aspects of sociability, fearfulness and a variety of expressions of aggressiveness.

While the data did not show major differences between left and right pawed dogs across a broad spectrum of emotional behaviors, some interesting results emerged when it comes to aggressive responses that dogs are apt to make toward unfamiliar people. Here it seems that the left pawed dogs were more likely to show such aggression. Dr. Schneider summarizes his results as follows, "I reported a statistically significant relationship between stranger-directed aggression and the presence of a paw preference. Dogs without a paw preference demonstrated lower aggression scores. When I looked more closely at the dogs with a paw preference, it appeared that it was those dogs with a preference for the left paw that were driving this relationship."

Such results would be consistent with the kind of findings that researchers find in left-handed humans, with reports that they are more likely to react with negative emotions and even aggression than their right-handed counterparts. Of course in both dogs and humans there are many other factors which determine the likelihood of aggressive responses, including age, sex, personal history, health, and genetic factors. However looking at these results prompted Dr. Schneider to say, "The take-away message for me is that there appears to be more similarities between human and animal brains than we once thought."

Stanley Coren is the author of many books including: The Wisdom of Dogs; Do Dogs Dream? Born to Bark; The Modern Dog; Why Do Dogs Have Wet Noses? The Pawprints of History; How Dogs Think; How To Speak Dog; Why We Love the Dogs We Do; What Do Dogs Know? The Intelligence of Dogs; Why Does My Dog Act That Way? Understanding Dogs for Dummies; Sleep Thieves; The Left-hander Syndrome

Copyright SC Psychological Enterprises Ltd. May not be reprinted or reposted without permission

Stanley Coren, Ph.D., FRSC., is a professor of psychology at the University of British Columbia.

High Temperatures Raise the Risk of Aggression in Dogs

In dogs and humans tempers are more likely to flare as the temperature rises.

Aggression and Fear Can Be Reduced in Specific Dog Breeds

Genetics may provide an alternative to breed-specific legislation for dogs

Dog Obedience Trials Began Because of Poodles and a Farmer

A brief history of how two women popularized dog obedience as a sport.